You can now edit Shopify orders in Skubana similar to how you can edit manual orders.

The following are the edits you can make on Shopify orders in Skubana:

In addition, the following actions are allowed:

Making edits to Shopify orders in Skubana will have varying effects on their order display for fulfillment & tracking in Shopify. The following sections outline possible editing scenarios and explain how Shopify order fulfillment display would be affected.

Skubana will push a tracking number to Shopify each time an item ordered in Shopify is fulfilled.

We will only partially fulfill the line item on Shopify.

Image: A partially fulfilled order before a user has marked the "removed units" as fulfilled. 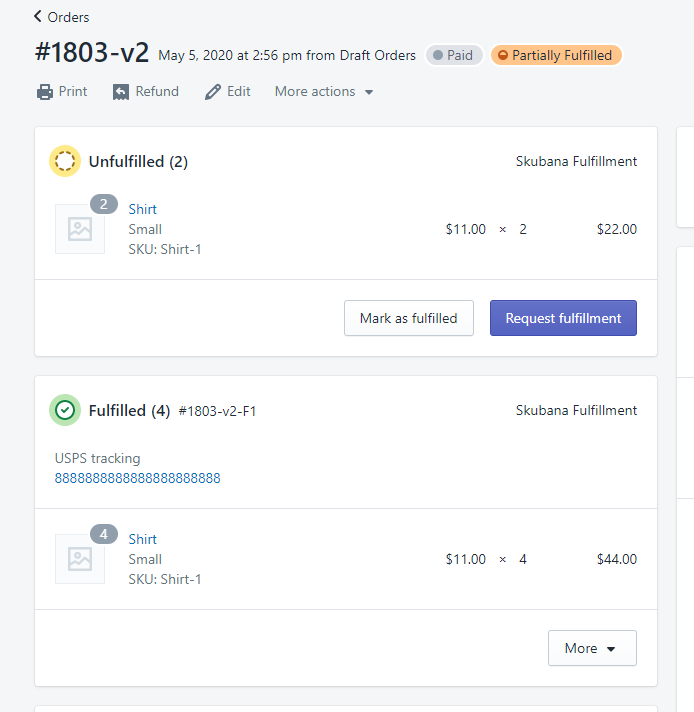 We will specifically "fulfill" the quantity ordered from the original Shopify order.

These changes will NOT be updated in Shopify. These edits will only exist in Skubana.

Scenario 4: Adding a new item to an order

If a new SKU/product was added to an order in Skubana (it was not included in the original order on Shopify), then Skubana will not update/notify Shopify upon it's fulfillment. There must be a connection to the channel for a product in order to "update" it with a fulfillment status. Any new products fulfilled will simply be "skipped over" when pushing tracking to Shopify, while any other original order items and quantities will be marked as fulfilled with tracking.

NOTE: In order to add a NEW ITEM (not quantity) to an order, much like manual orders, the item must have a product listing for the channel. That means both a Listing SKU in Skubana for that Shopify channel, as well as a legitimate listing in your Shopify store with a matching SKU. (A legitimate listing would not be a duplicate or unpublished product, unless you had those settings enabled for your Shopify store.)

You cannot remove ALL items & quantity from an order. As a general rule, if an entire line item is removed (excluding bundle breakdown, unless all broken down bundled items are removed), we will not fulfill that item in Shopify.

Additionally, removing all originally ordered items from a Shopify order, and adding on new product(s) to it in Skubana will result in the order remaining unfulfilled in Shopify upon shipment.

If you remove an entire line item/product from an order in Skubana, without a bundle breakdown action, then that line item will not be fulfilled on the Shopify order.

Scenario 6: Removing a component from a broken down bundle

If you remove a component from a broken down bundle in Skubana, the full bundle product on the Shopify order will be marked as fulfilled with tracking as soon as all remaining core components are shipped.

Scenario 7: Order is split, quantity is split across two orders

For example, you have a Shopify order that has one line item/product with a quantity of 2, and you split that order in Skubana into two separate orders, each with one line item of a quantity of one. When you fulfill the first order, we will hold off on pushing tracking and fulfilling the order until all units remaining in Skubana for the product are fulfilled.

Whenever the remaining split order is shipped in Skubana, then the entire line item will be fulfilled in Shopify with both tracking numbers.

Image: A split order in Skubana has sent tracking information to Shopify only after the remainder of the quantity ordered was shipped. 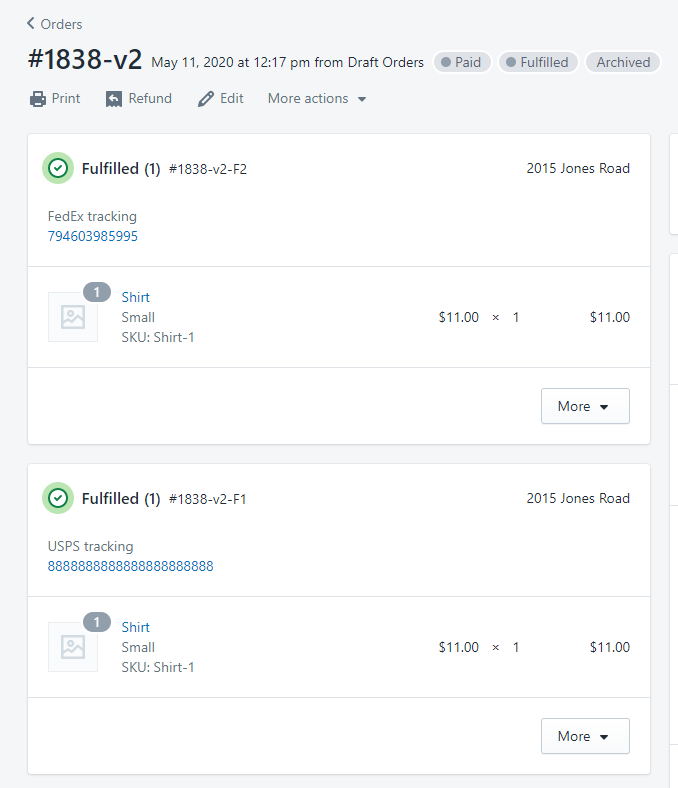 Functions as normal - a bundle is broken down, no items or quantities are edited, the order is shipped in Skubana, and the entire order is fulfilled in Shopify.

Skubana will not push any tracking information until all bundled items are shipped in Skubana. If you ship a single component, no tracking will push. When all components of the bundle are shipped, tracking for the bundle will push to Shopify.

See Scenario 12 - result is the same.

All items will be fulfilled, but the tracking number applied to the bundle will be for the second/last shipment with the last remaining component in it.
Example:

Image: Shows the bundle product grouped amongst the last shipment to go out with a bundle component in it. 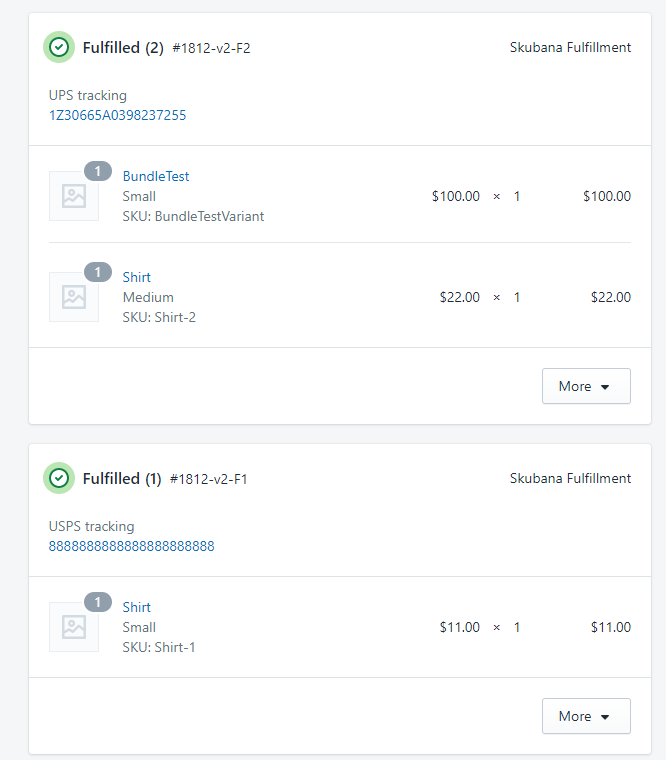 This ensures that only 2 customer notifications are sent, rather than 3 (the third being a potential duplicate of the first shipments tracking number, even though the line item was technically involved, the bundle wasn't fully shipped until the last shipment). This related to the Tracking Numbers Update section at the top of the page.

COGS and Analytics are based on the items shipped, rather than the items originally ordered. Any edits made to a Shopify order in Skubana will be used for Analytics purposes as opposed to any original values from Shopify.